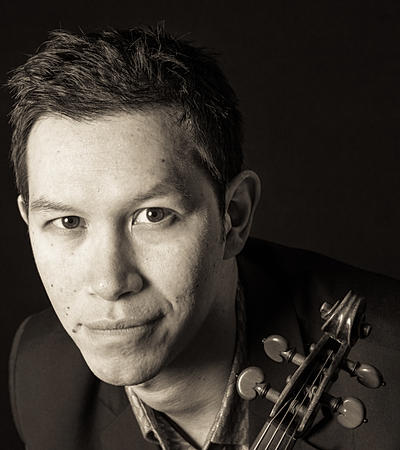 “I was five years old when I saw Itzhak Perlman on Sesame Street, playing the violin, and I thought, I could do that,”  Andrew Eng softly laughs.  And so began his journey with both the viola and the violin.  Andrew plays with the Music In The Barns Chamber ensemble that will be performing on August 1st at The Artscape Wychwood Barns, 601 Christie Street.  I had the pleasure of talking balance, discipline and passion for music with him.

Andrew reminds me of water.  A calm, clear pool whose energy quietly roils up from the depths when he talks about playing, teaching and his history as a student.  Andrew joined the Toronto Youth Orchestra at 12 and played with them until he was 18.  It exposed him to repertoire, performing and coaches.  Young Dae Park was a mentor who stood out, inspiring and encouraging Andrew.  “It was his willingness to give of himself.  It was my first exposure to orchestral playing.  The greatest thing I learned from him was discipline.  To commit to your instrument and the music.  When you have this, learning comes easily.”  Andrew likens this philosophy to martial arts and the fine arts.  “You find this in differing areas of expertise.  This discipline helps us to be better people”.

And he is bringing this sensibility to his work as a teacher in Montpellier, Vermont.  He co-created the New England Chamber Music Festival.  This program was put together specifically for young string students (ages range from 12 to 18), enroute to professional careers in music.  It’s educational component allows kids to to work every day, “to get really good, really fast.”  Andrew doesn’t think of himself as a teacher in the conventional sense.  “Because kids are like sponges, I only (need) to offer suggestions.  I’m more of a guide. I draw on my experiences and the music itself.”  He continues, “Other than theory and history, we also work on the unconventional aspects.  We focus on rehearsal techniques, on the performance and working with other people.”  This is a very holistic approach to working with students.  Andrew then makes the connection of music with the body.  “If you are tight or tense, then you end up putting in more effort than is needed to play.  I think this is a Universal lesson.  We just need to tap into what is already there, and allow it to happen.”

We then speak of music as a language and the assumption that musicians are good at math.  “When I have spoken to high level mathematicians, they speak about math in the same way we (musicians) talk about music.  It’s the same thing, only in a different element.”  You can tell he finds this fascinating.  Andrew then curves into a different tempo,  “Music is its own language.  When individuals speak, we all have accents, but we can still understand each other through the music.”  After “accidentally” substituting for a violinist with an Argentinian Tango ensemble, he fit in so well, and in spite of his lack of Spanish, he was eventually adopted into the group and “became an honorary Argentinian.”   He even took tango lessons to understand the music more thoroughly.  As a classically trained musician, tango music was “the only fulfilling musical employment,”  after he got out of school.  “The music is instinctual.”  He continues, “There is a humanity in the music.  It touches people on a deeply, emotional level.  It’s so much like chamber music.”  Even in the dance, “if you don’t give a clear cue, your partner will miss their mark.  And when playing music, it’s the same thing.  There is a sensitivity that is unique, or more apparent to that style of music.”

Regarding his enthusiasm for new work, Andrew is again drawn to Argentina in the form of modern composer Osvaldo Golijov.  “He melds culture and background into his compositions.  His music has a distinct voice.  You experience all sorts of powerful emotions.  There is a depth of colour that makes it accessible, without being cheap.”  Which brings us very close to the essence of what music means to Andrew (or at least what I gleaned from my time with him).  “There must be a truth to what you have to say (when you are playing music).”  But when playing with other musicians, how do you do that without one person shouting over the other players?  “You need to adapt and find a balance to tap into.  Music has opened the door to seeing the importance of balance and self discipline.  Music is what I need to be a complete person.  At least this has been the vehicle I have been driving.”

And on that note, I encourage you to drive to the Artscape Wychwood Barns on August 1 at 7:30 to hear the Music In The Barns Concert. Tickets can be purchased in person at Soundscape, 572 College Street, or online at musicinthebarns.com/concerts.

Joy Tanner hails from Pittsford, New York. Graduating with
honours with a double major in English and Theatre from
SUNY Potsdam, she also holds a diploma from the British
American Drama Academy (London/Oxford). She moved to
Canada in the early 90′s, and has been acting professionally
on both the big and small screens for over 20 years. She is
best know for her roles in Cold Squad, Life With Derek and
DeGrassi The Next Generation. Recent film credits include
The Phantoms, The House At The End Of The Street and
Neverlake.

A Blizzard of Winter Break Learning

This site uses Akismet to reduce spam. Learn how your comment data is processed.